To solve this kind of problems containing differing currents you usually use so called relays. How they work is beautifully explained  here: http://en.wikipedia.org/wiki/Relay

So the first idea was to use relays. To create a dimming effect we would need one relay with a certain resistor for each state of brightness of the lightbulb. This is how the relays look like: 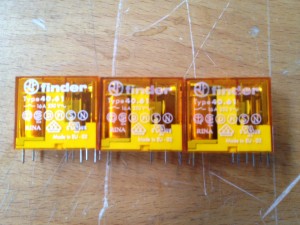 To get an even dimming effect we wanted to use 6 to 9 relays per lightbulb. Soon we realized that this was not the ideal solution for the problem for many reasons. First we don’t really know how to restrict the very high 230 Volts for the different states of brightness. We did not find any satisfactory solution, and always kept ending with the same answer, but more on that a little later. Second, for 9 pairs of lightbulb with each 9 relays we would be using 81 relays, which would cost a little less than 600€ only for relays. Unfortunately this is beyond my possibilities right now. On further research we found a cheaper version: 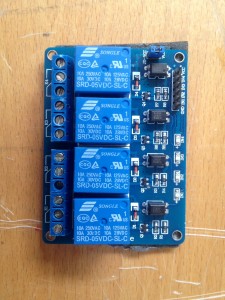 This is 4 in one and would cost a quarter of what the other would cost. The problem is only four levels of dimming per lightbulb, and still, we don’t have a proper solution for the resistors of the current. So now what?

On our search for high Volt resistors we kept finding this high Volt potentiometer, which would be ideal for a seamless dimming of our lightbulbs. This would render the former idea with the relays obsolete. This is how it looks like (pretty cool I think ~POWER CONTROL~ yay): 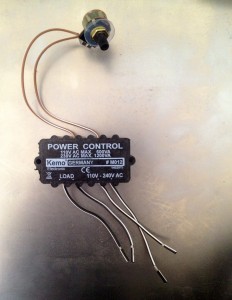 So is this is a step closer to our solution? The question now would be how do we communicate the Arduino with this thing? A good deal of research later we found something else. We realized there is a whole instructables webpage dealing exactly with this Arduino-lightbulb-dimming-problem. You can find it here: http://www.instructables.com/id/Arduino-controlled-light-dimmer-The-circuit/ This is basically the solution to the exact problem we where having at the beginning. I would only need to buy this (compared to the other solutions) very cheap components and just follow the instructions and build it myself. I wasn’t happy with this though. This would be too easy. Specially because I really liked the archaic aspect of the initial idea of several, paralleled relays working and clicking all together. It felt more true. Following an instructables post would be like cheating somehow. On top, we found that you can already buy a prefabricated piece like this, that only required minor additions in order to work. It costs 21,21€ on Conrad and looks like this: 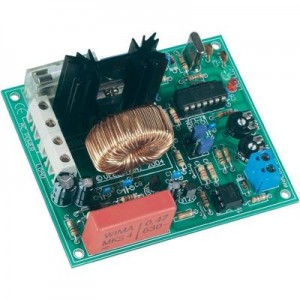 Ok, so now what…? I kind of really like the ~POWER CONTROL~ potentiometer from earlier. It looks super cool and it already does something very valuable: it perfectly and seamlessly dimmed my lightbulbs. I want it!

Problem: how do i regulate the ~PC~ potentiometer with the Arduino? The answer is pretty simple and also a little funny: with servomotors! 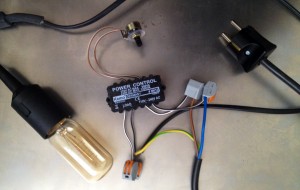 What do we have now? An Arduino controlling a servomotor controlling a potentiometer which at the end dimms a lightbulb. And all without any complex (and also dangerous) parts. I really like the mechanical aspect of it. The motors taking over the task of regulating the brightness of the lightbulb. I think it’s a very simple and very appealing solution to a rather complex problem.