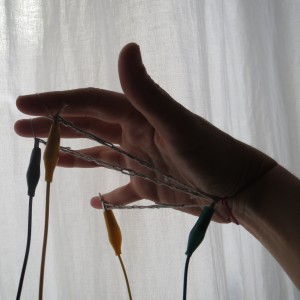 To learn how to connect physical objects with computers, we learned how to use Processing and Pure Data.

For this exercise I decided to use Processing and draw a stroke with and input coming from stretch sensors that are read by Arduino and then send the signal to Processing.

My idea was to create a sort of knit that would adapt to subtle movements of the hand,  with three separate sensors controlling the direction of the stroke on the screen. by controlling the x and y axis it would move around freely in the screen, but by adding a third sensor that controlled the weight of the stroke, it would end up giving a sensation of movement in a tridimensional space. Apart from that I gave the screen a certain opacity that would generate a stroke that leaves only a little path behind and then disappears. The mix of all this elements makes the dot(stroke) appaer to be like a flying creature that moves around in a space of its own. By using the hand to control the movements of this creature, it gives an impression of possession or magic.

To close this project I used this idea to create a PCB board and join two weeks of work. 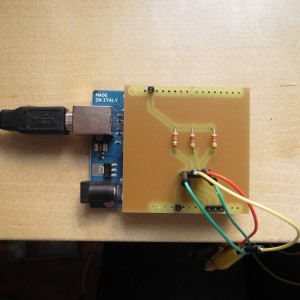