I have chosen to change projects. The bike light was an interesting idea – But rather then starting an all new project, I decided to complete an existing one. “Cycle Pole” is a public design concept I developped about a year year ago.

What it’s for: Accidents between cyclists and pedestrians are a much overlooked issue. The majority of them happen, where cycling lanes are upon the sidewalk. At certain spots they occur particularly often, for example at pedestrian crossings and bus stops. This is where Cycle Poles are put in place.

What it does: It detects an approaching cyclist and triggers the sound of a bike bell. This is intuitively recognised as a warning sound by pedestrians and accidents can be prevented.

How it works: There are four main internal components – a PIR motion sensor, a microcontroller, that processes the signal and outputs the sound, a speaker and a battery. 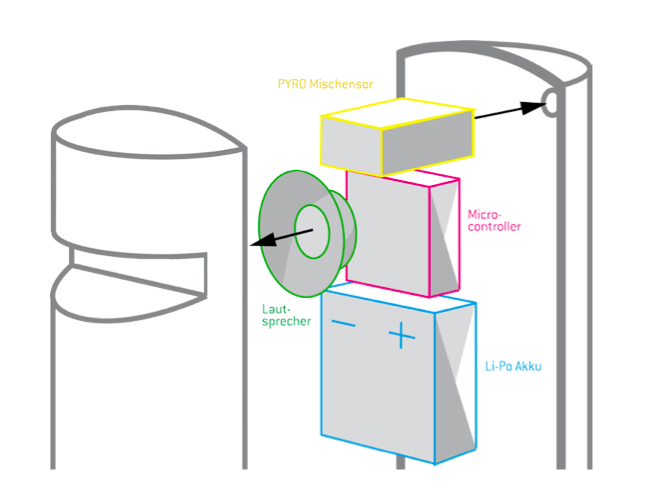 NOW: This is where it gets interesting. When I intitially developped the concept, this was as far as I got – now I’ll try to find actual solutions to this ”black box” and how it can work in detail.

Goal: I want to build a fully functioning prototype of Cycle Pole. This will be optimised for one specific traffic spot and used for user testing.

Hardware: Which components to use and how to connect them?

Code: Detecting the inpunt and triggering the output.

Fine-Tuning: Adjusting the sensor’s sensitivity, adding variations and exceptions to the code.

Testing: Along the way I’ll try to test  what I’m working on, especially towards the end in the actual traffic situations and document the results.

…I will also take a second sensor in consideration, that could detect pedestrians, so the sounds are only played when both cyclists and pedestrians are around.